Today, as promised, Visual Studio 2008 Service Pack 1 was released.  You can download the ~800 MB Service Pack from the following location.

Read about what Service Pack brings to the table here.  My experience with (SP 1 Beta) has revolved around the ADO Entity Framework, but I understand that ADO.Net Data Services are the next big thing to hit since WCF.

My understanding is that the earlier attempt to integrate JavaScript IntelliSense caused some memory and stability problems, but I’m going to go out on a limb here and suggest that perhaps it is fixed now..

Also bundled with the Service Pack is the release version of the ADO.Net Entity Framework which is touted as the “Enterprise Strength” version of LINQ-to-SQL.  Early CTPs had several issues, it will be interesting to see whether some of those early concerns have been dispelled with the new release.

The RTM version of Service Pack 1 doesn’t supercede the Microsoft® Visual Studio Team System 2008 Database Edition GDR July CTP.  You will need to install the GDR to have support for SQL Server 2008 databases in Team Edition for Database!

However, I think the biggest point is: “Database Edition no longer requires a Design Database. Therefore, it is no longer necessary to install an instance of SQL Express or SQL Server prior to using Database Edition.“

I’m not sure when this will be released as RTM, but I’ll be trying it out in a Hyper-V Virtual Machine first. 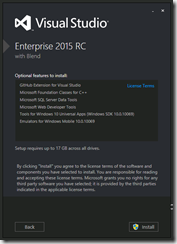