As a dot-com bust survivor, 2010 marks a particularly sensitive anniversary for myself and, no doubt, many other Information Technology workers.  This time, ten years ago, I worked as a programmer for a company called K*Grind (www.kgrind.com) which, at the time, was aimed at providing high quality media content aimed at teenagers and youth.

Later in 2000, the company shifted focus and decided to become an IT solutions provider, and as such dumped the content producers, writers and radio staff to become a pure IT shop.

Now, the reason I am writing about this today is partially caused by my dislike of some of the recent news articles I’ve been reading recently, such as this one by the Australian.

The so-called “dot-com whiz kids” aren’t the highly publicised CEOs (some listed in the linked article), but were actually programmers like me (such as in the article pictured below) who had to try and put together a technical solution for these start-ups.  We certainly weren’t rolling in millions, and a lot of us felt the financial hit far more than the corporate fat cats, I might add.

I’m sorry, but I fail to feel anything for the people listed in this article (and many others like it).  I’d like to see an article interviewing people like me who had to scrape to pay our rent (when the company directors fled overseas), or got screwed out of an entire years’ worth of superannuation.  When will our story be told?

Next time you read something about the dot-com crash, take a second to think about all the staff who were the real victims. We’ll take a quick break from my multi-part post on Windows Vista to bring you this outrage-based rant on unfair increases in Fuel prices.   […]

So by now you must have read that Microsoft’s Visual Studio 2010 has been released to market.  What you may not necessarily […] 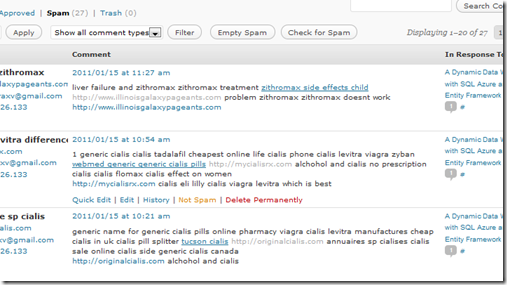 This is something I just don’t understand.  We all know about e-mail spam, it has been around for almost as long as […]