By now you have probably registered with TFSPreview.com and created an initial Team Project.  Using the same Windows Live credentials, now we’ll look at connecting to and consuming resources from Visual Studio 2010.

I’m assuming that you already have Team Explorer installed (if not, you’ll need it) and that you’ve applied Visual Studio 2010  Service Pack 1 and the KB Hotfix.  I encountered a plethora of issues getting the hotfix applied, but hopefully you will have had less issues. If all goes well, you’ll get an authentication page pop up and ask you to select the federated security model of choice (as of writing, only Live IDs are supported).

Selecting the default provider, we’re taking to Live to sign in – use the same credentials you registered your TFS service with (for best results).  You can create or assign other IDs later on.

Once authentication is complete, you should find your server has been successfully added to the list of TFS servers.  Select your server and you should be prompted with the available Team Projects: Once opened, Team Explorer should populate as if the TFS service was not cloud based, which means we should be able to use TFS more or less as we would normally, i.e. source control, work items etc.. A few things to note, from my first glance:

In the next part, we’ll add a sample solution and define a build controller, and define a build definition or three, and see how well TFS responds.  We’ll also allocate some extra users, and play with permissions, groups and work items.

As part of some work I recently undertook, I developed a number of “cheat sheets” which are often introduced into trade studies […] 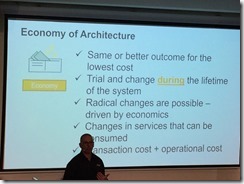 One thought on “Team Foundation Server in the Cloud (Part 2)”