Well, it’s now official – sort of – given that we’re looking at pre-release software, but the start menu is set to return after an absence since Windows 7.

It’s clear in the most recent preview (9926) that there are big changes in store for the next version of Microsoft’s operating system, and (although it’s too early to be sure) I’d be surprised if the changes aren’t widely welcome by most circles.  It seems that Microsoft may have started listening to the wider Microsoft community, and specifically desktop users who have had a turbulent time with Windows 8 and 8.1.

The installation experience didn’t seem to be much changed from the previous technical preview, so I’ll skip a review of the installation and just jump into the operating system.

Let’s take a quick spin around the new technical preview, shall we?

isn’t gone quite yet.  You can still launch “formerly Metro” by clicking on the full screen button at the top right of the new start menu: The preview, of course, sports

which is set to update itself automatically by default: is no more when running in Desktop mode, the functionality in it has been relocated either into the new Start Menu or off into a new dialog.

The Windows 8.1 charm bar (for reference) – Windows 10 sports a ‘task view’ which looks suspiciously like the x window manager which has been featured in xwindows for over a decade and a half:

..and that’s not a complaint, as it will help with multi-tasking immensely.  There might be more to the functionality here – so I’ll file it under something to dig deeper in, and move on.

Launch in their own host container which is a much nicer experience when compared to the (current) Windows 8.1 experience: The control panel features a way to upgrade your edition of Windows in-line, but sadly not in my region (I suspect this won’t work in pre-release anyway): This was a very brief skim through the new Technical Preview of Windows 10.  I’ll be back (hopefully) with a deeper look once I have a little bit more time to review the changes.  Overall though, I think the changes are trending in the right direction. 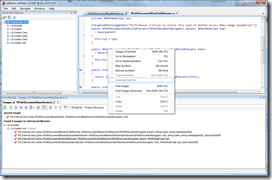 Well, it is about that time of the year when TechEd Australia kicks off; this year it is being held on the […]

As the BUILD conference (formerly PDC) kicks off in Redmond, we are finally treated to the official launch of the long, long […]