That’s right, stay tuned for my review of Microsoft’s next release of the Windows platform, Windows version 7.  The Release Candidate has been made available to TechNet and MSDN subscribers already, and the public release is scheduled for around May 5th.

The Beta release which has been out for a while now, was largely a hit with most users commenting on how stable it was (for a beta).  My review will focus specifically on the Tablet PC features and improvements to the User Interface and the core shell.

The Release Candidate does not expire until July 2010 and from what I’ve heard, the RC is almost RTM quality, so this is one operating system we’ll be installing as a native operating system (no virtual machine for this release!)

Also on the horizon – two entries on SQL Server Reporting Services (SSRS) 2008 and what has changed to the Web Service component.  The new version uses a WCF service and no longer relies on Internet Information Services (IIS) so be prepared! 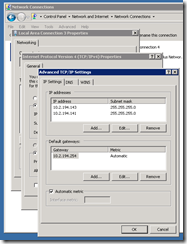 Introduction It is important to understand what a network load balanced cluster is and what it does. The cluster is made up […]

Recently I went digging for a solution to a problem which has been bugging me on Windows Server 2008.  It seems once […]

We love it when a good patch comes around – so here is a cumulative patch for the .NET Framework 4.0. There […]