Part 2: Rebutting (or agreeing with) the Top Ten Reasons Why You Should Get Vista (or, “why isn’t this a Late Show Top Ten List?”)

Yesterday, I posted my thoughts regarding an article from APC on why users shouldn’t migate to WIndows Vista.  For the sake of balance, today I’m going to attempt to debunk a second article from APC on why users should migrate to Vista.  Some of the points I agree with.  Most points I disagree with, as (in particular) I actually think there are better reasons to migrate.  See the next article (Part 3) on the bits people have ignored.

This is a nice feature to have in your operating system.  Vista really does have some great in-built support for photo viewing and some good video editing tools.  It’s pretty fast, but so it should, given the minimum hardware specs.

Eye candy has always been marketed as a draw card (XP’s ‘revolutionary’ new Desktop experience, Active Desktop in Windows 98 etc), but at the end of the day – unless you’re an avid multimedia user (be it games, photos, video etc) – it’s not going to massively change your current PC experience.  Well, probably not enough to warrant the price tag and hardware requirements at any rate.  I’d like to have seen something similar to SphereXP in Vista, by the way L

Vista has burdensome (which is a nice way of putting it) DRM which also makes upgrading or migrating less attractive, even with the media bells and whistles. Keep that in mind before going out to buy that nice HD compatible monitor for your intended home cinema upgrade!

Why is this a selling point?  Yes, it makes Vista is easier to install.  That’s great, but my parents and grandparents are hardly going to be installing a base operating system anytime soon.  In other words, early adopters are likely to be people who know how to install an operating system and if not they’ll be interested in trying – so it will appear to them.

This can’t seriously be considered a selling point given the abundance of live CDs which Linux distros have made available for years now.  Slip disc installs should have been possible when Windows XP launched, the same can be said for USB disk support – the installation experience changes in Vista have been way, way overdue.  How long have we had to maintain 3 ½” disk drives??

Given the number of top shelf hardware devices which will *barely* be (or not at all) supported on January 30th (the consumer release date) it’s hard to see how this can even be a statement of fact.  However, assuming that within the next six months all new hardware is released with Vista capable drivers, you can see why the overhead around drivers is only going to be a benefit for the end user.

I, personally, think that 3rd party drivers and add-ins are the cause of most of end user’s suffering.  I can’t remember how often I’ve had to help someone fix their computer by getting proper drivers or uninstalling an Internet Explorer add-in – but it’s very often!  Clamping down on device drivers has been long overdue and quite an accomplishment.  Some hardware manufacturers release real junk as device drivers – it’s nice that they’ll have to life their QA game in order to be in the market for potential sales/users.

Again, it’s hard to see how this is exactly a quantum leap ahead of existing software which runs fine on Windows XP or earlier OSes.  Yes, the indexing is built into the OS.  The only thing I can say is that I really dig the new Start menu, but otherwise I’m not really blown away by the built in search.  Users have had years of training to know how to file their data (usually in the ‘My Documents’ folder) – even the most rudimentary end user can navigate their personal files without any hassles.

This one is another tough sell as a migration/upgrade reason.  Give the end users something they can’t get on Windows XP!

Oh dear, another long over due feature.  The real question is why Windows XP is so miserable at hibernation/sleep modes.  It’s not like either are ‘new’ to mobile computing platforms.  My Dell Inspiron 8000 had support for both, way back in 1999.  Why has it taken almost eight years for Microsoft to build software that handles hibernation or sleep mode?

I’m filing this under the same category as point #2 – i.e. this is functionality which should have been delivered earlier.  The fact Vista supports it isn’t a “wow” factor, it’s an “I can’t believe you haven’t done it sooner” feature.  It’s not particularly inspiring that it’s been such a long wait, but it’s a welcome one.  I’ve heard a few people grumble that it doesn’t work well for them, but I’ve not had any issues with either sleep or hibernation so it’s a passing mark from me, and it certainly answers the “Give the end users something they can’t get on Windows XP!” line, doesn’t it?

I must admit, I haven’t had a chance to test out BitLocker, because you need to prime the disk drive during installation (and I didn’t).  Until I can actually test it, I’m going to have to say “No comment”.  Having said that, I have some points of view which might prove useful:

Poor WinFX got canned before most of the early betas, so it’s somewhat ironic that ‘better file navigation’ is a selling point J  As the author points out, this should have been in Windows XP or earlier, but (like many things on this list) it wasn’t but it’s in Vista today.  I’m sensing a pattern to the selling points – are they old ideas which are being repackaged as new *features*?

I’ve actually, at times, found the new shell to be extremely clunky as explorer tries (by default, mind you) to load all the metadata in files.  It also tries to do this to network folders, which isn’t necessarily a good idea.  The shell, in my opinion, has become less stable and far less accommodating to an end-user who has something specific to do, and seems to freeze up all to easily.  Vista would be so much better if some of the shell improvements could be disabled with ease, especially for slower machines.

With that in mind, I’m sure that a less technical user might really like some of the new Explorer UI and will no doubt use a lot of the new shell extensions, as they did way back in Windows 98 when the fancy shell was originally premiered.

This is probably one of the very few decent reasons to upgrade since this, in conjunction with improvements to the system restore, really does add safety to using a Windows machine.  This, and Windows Defender, are bigger selling points than one might think, and ought to be better communicated.  The other selling point is the new virtualization of protected directories – to ensure that sensitive or important settings are not overwritten (intentional or not) by third party software.

Advances in DirectX are always fun to write about, but in a sense, these improvements are necessary to keep pace with the PS3 and the Xbox 360 which are, for many reasons, much cheaper gaming platform alternatives.

DirectX only really becomes a selling point when there are games which use it – so check back in six months or so.

I think I said it better myself, in Part 1J.  However, I wouldn’t go so far as to suggest that Redmond “owns” anybody.  Migration to the latest platform is entirely at the discretion of the end user.  However, as I previously stated, at some point the diminished returns (and higher expense at maintaining) of an old platform/hardware will balance the cost proposition in favour of upgrading.

Tomorrow: A summary and a look at other benefits that Windows Vista brings, which I think have gone (perhaps) unmentioned.

It’s been a tough week for me from a hardware and infrastructure perspective. Late Thursday night, I lost one of the two […] 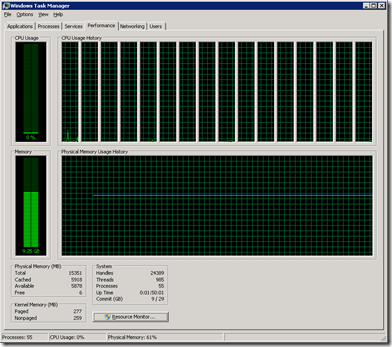