So by now you must have read that Microsoft’s Visual Studio 2010 has been released to market.  What you may not necessarily be aware of are the different “flavours” of Visual Studio.

The 2005 Edition of Visual Studio comprised of Professional, Tools for Office and Team Suite (Architect, Development, Database and Test)

The previous edition, Visual Studio 2008 came in some basic editions (including the express, professional,  editions) and then split into Visual Studio Team System flavours.  We had roughly:

Now, for Visual Studio 2010 we have the following definition:  Professional, Premium, Ultimate and Test Professional (with Team Foundation Server for Enterprise Teams).

Let me state right off the bat, I loathe the new naming convention.  With the exception of the Express editions which are free (and I think this is a great thing), there is a price tag associated with these versions of Visual Studio (be it a direct purchase or through a subscription such as via MSDN), so it’s really for professional use.

So on the basis that these are professional development products, naming one product (in particular) “Professional” is sort of stupid – especially when it is targeted “For individuals to perform basic development tasks” – it doesn’t sound very professional to me.

I really despise the terms “Ultimate” (ALM tools) and “Premium” (for teams).  These terms have been bandied about by herds of caffeine addled marketing bunnies (or MBAs in power suits) and can apply to just about anything (“premium content”, “ultimate coffee maker” etc).  In my humble opinion you can (sort of) get away with marketing flavours of Windows in such terms, but it simply looks stupid put in front of a (presumably) professional, technical audience.

Why they could not have stuck to more traditional terms (“Professional”, “Enterprise”, “Team Suite”) is beyond me.  I understand the psychology of it (can I be happy with “Premium” when “Ultimate” sounds like it has more cool things?) but honestly, I would prefer it if the Microsoft Marketing division would stay the hell away from Developer Tools.

With regard to the test edition – I think $2169 is a fairly steep price for what is effectively a v1.0 product.  Those of you who have been following the development of the Test stream will know that VS 2010 marks a massive split from the traditional TFS model, and introduces a new toolkit and approach for testing with Microsoft Development products.

When you compare this release to Mercury/Quality Centre it really doesn’t compete (even though the VS Test Edition is much cheaper).  It would be nice to see a cheaper or – dare I say it – a free version until it reaches maturity?  We love a fully integrated lifecycle management and work item system though, so hopefully this line of product continues to improve!

A last point on the “Ultimate” edition – it really looks like Visual Studio Team Suite and has the price tag to match – a cool $USD 11,899.  Team Suite sounds so much more accurate/appropriate, doesn’t it?  Edit – Ultimate includes a production license for Team Foundation Server (plus one Client Access License) which decidedly adds serious value to the price.  I’d assume that there is some kind of bulk CAL pack available for expanding the software between a team.

However, despite the naming convention used, it can be said that these new SKUs (no matter what they are called) represent a better packaging of functionality than we could previously access.  Over the past five years or so, complimentary functionality (such as database projects, unit testing etc) have been split into different product lines, making the suite weaker (unless you had access to the very pricey Team Suite edition).

Visual Studio 2010 does away with many of these traditional lines of division, and unites a lot of this functionality into a much easier to understand (SKU) family.  It’s just a shame about the language/labelling/naming.  I’d also like to compare pricing, but I’ve been having trouble finding a reliable source to compare the editions.

Now.. if we could just get BizTalk and SQL Development tooling updated to work within Visual Studio 2010 (which are supported currently within the Visual Studio 2008 Shell)…………..?

Tell me your thoughts..

Recently I alluded to writing a series of posts on the Entity Framework Futures, now referred to as the “Microsoft ADO.NET Entity […] 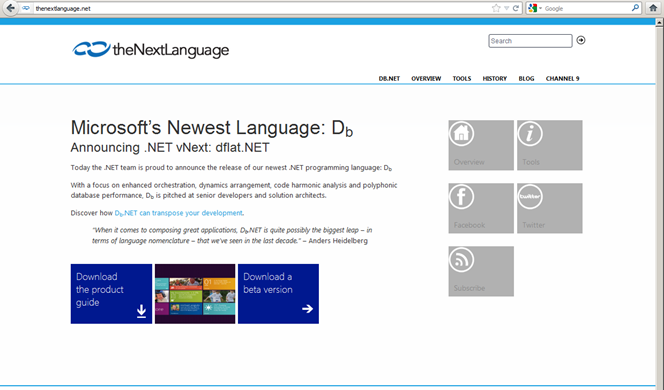 Quest Mode = On Today is April 1st, and (as always) it is April Fool’s Day.  Google unleashed an awesome “Quest” mode […]

Hi Everyone, The annual SQL Server Code Camp is on again this year in Wagga Wagga (NSW), Australia.  The dates are October […]