Node.js is a platform for building fast, high-scale applications in JavaScript. Node.js uses an event-driven, non-blocking I/O model that allows developers to quickly and easily create everything from simple websites to high-scale real-time applications. In this session you will learn how to build, deploy, and host your Node.js application on Windows Azure.

Disclaimer: These are conference session notes I compiled during various sessions at Microsoft Tech Ed 2012, September 11-14, 2012.  The majority of the content comprises notes taken from the presentation slides accompanied, occasionally, by my own narration.  Some of the content may be free hand style.  Enjoy… Rob

Kicking off.  Nathan Totten – Evangelist, Windows Azure. ; This is a Level 200 session, so it will be fairly brief with some code samples.

All operations are essentially queued, and actioned by the single thread. ; The thread can’t afford to hang!

Bad At (or not great at)

Native build on Windows. ; Ported from Linux, can host Node processes on IIS with IISNode, which gives the benefits of IIS. ; Modules which work on other platforms will work on Windows. ; Contains package manager support from the commandline.

Most Node.js/Windows Azure functionality can be developed without visiting the Azure control panel page. ; Supports inline GIT support – interesting. ; A bit of deployment pain as access is denied. ; Heading to the Azure Control Panel after all… Using the command line to invoke the server side GIT repository to create the appropriate folders.  This might be tough for non-GIT users to follow.  TFS users looking baffled.

Packages being pulled down (like NuGet), but on the Azure server side.  Site is now up and running.  Deployment history is tracked on the Azure side.  This allows rollback functionality.  The GIT integration is quite nicely done.  Somewhere Ted Buchan is grinning.

Deployments look pretty impressive, but a knowledge of GIT would be most handy.

There’s something called a NodeInspector.. It runs in a web browser (but not Internet Explorer), so now we’re loading Google Chrome..  ironic.  It’s a matter of putting the Node server into debug mode.

NodeInspector.. why does that remind me of Inspector Gadget?  Go go Node [thing]! Yes, you can also remote debug assuming the correct ports are opened.

Watches files for changes..  Otherwise, to void the cache, you’d have to restart the Node server.  Installed as a package through command line:  npm install node-inspector –g As Azure is running currently  on Windows Server 2008 R2, and that only IIS 8 (Server 2012) supports web sockets, as a consequence the current Node.js support in Azure needs to use long polling (as mentioned before).  This will be changed.. soon.

Head to github to find out more – this is open source stuff.

So I have an event to go to between 6pm-8pm so I’m going to have to wrap up early.  This has been a pretty interesting introduction to the world of Node.js on the Windows platform.  There are undoubtedly some interesting uses for this approach.  It will be one to watch.

Most developers are familiar with the concept of scaling out their application tier; with SQL Azure Federations it is now possible to […] 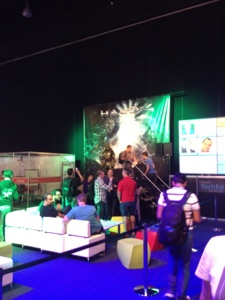 Here’s a bit of a look outside the sessions at TechEd 2012: Last night at the Marketplace Awesome driving games Busy but […]

So, you’re building apps that span multiple devices and you’re curious about what the cloud can offer. Is it possible to deploy […]

This is going to be a long post.  In fact, I’m very unlikely to finish it in one session, so check back […]