In this session, William Tulloch and Mahesh Krishnan, authors of the book "Introducing .NET 4.5" talk about all the new stuff in .NET 4.5. If there is one session that you want to go to that covers all the important bits in .NET 4.5, this is it.

Disclaimer: These are conference session notes I compiled during various sessions at Microsoft Tech Ed 2012, September 11-14, 2012.  The majority of the content comprises notes taken from the presentation slides accompanied, occasionally, by my own narration.  Some of the content may be free hand style.  Enjoy… Rob

A quick note for Spanish readers – you can read this article in Spanish at Enrique Ortuno’s excellent blog – at the following location.

We’re off.. a bit of a discussion about the history of the .Net Framework which is now 10 years old.  The overview is fairly succinct.  The presenters are quite relaxed, working off each other in a fluid fashion.

Showing the usage of asynch/await within the context of a WPF user interface.  Much less code required than traditionally necessary, especially with regard to UI thread marshalling.  Now we’re looking ‘under the hood’.

Naturally, using .Net Reflector.  We’re reviewing the assembly.  When using the asynch/await, the compiler generates a whole lot of code underneath.  Bear this in mind when using asynch/await.  It’s not ideal for small chatty applications.

This support is built into Visual Studio projects.  Avoid the need for cross platform precompiler definitions as the compiler will pick up unsupported code.

Let’s find out more.  Mahesh has the stage.

CRUD operations can be mapped to HTTP verb actions (GET, POST etc).  HTTP programming support enhanced in .Net 4.5.  Out of the box includes content negotiation.  On the fly content filtering using WebAPI.  Onto a [Demo]

Fiddler for the win!  Mahesh is showing the HTTP request/response in real time.  We’re seeing the raw JSON data in the response.  Now, showing how the response can be changed to return basic XML.  Out of the box functionality.  Reference data to Mr. Philip Beadle (of DotNet Nuke fame).

Adding a controller adds the appropriate handling code.  Needs to have exception handling, but otherwise everything is hooked up.

The HTTPClient class can be used to programmatically instantiate a HTTP client object.  Very useful for executing get requests and evaluating responses etc.

Polling has long been an approach for lookups.  Can it be done better?   Establish a connection with a normal call.  Full duplex bi-directional communication.  Built on HTTP, support for proxies.  Supports binary, UTF-8.

Message sent to server, server broadcasts to other users.  A little underwhelming being local box and two users.  Lets see the magic!  Time to look at the code:

Http Handler checks the request, routes to a handler if the request is a web socket request.  Would like to see this fleshed out a bit more.

Windows Workflow – he was pointing at me *grin*

Note that synch and asynch are in the generated client proxies.  Asynch methods were not enabled by default in the past.  Windows 8 client doesn’t support synch operations – asynch only (due to Metro/hanging UI thread).  No config files for Windows 8 apps.  Demo fail.. D’oh.

Moves closer to an IoC for mocking and dependency injection.

Quick thought – anything on the runtime compiler (Roslyn?)?

Looking at reactive systems – in memory data flows, agent based controls.  New .Net Library.
This is something I’m going to be very keen to have a play with.  Keep an eye on Sanders Technology for more on the TPL/TPL Data Flow.

Not a minor release..  great support for Windows 8, Asynch, performance improvements.  Let’s wrap it up there.

This is going to be a long post.  In fact, I’m very unlikely to finish it in one session, so check back […] 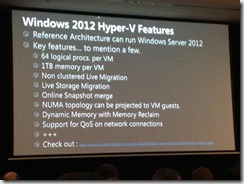 In this session, learn about the DPC (Database Private Cloud) Reference Architecture and how it can be used to consolidate thousands of […] 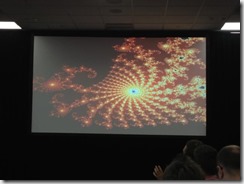