The IT kickoff session has begun with special guest speaker Jeff Woolsey from the Windows Server & Cloud area from Microsoft.

Jeff outlines the analysis that has gone into Windows Server 2012 in particular the pillars of the platform; datacentre, modern apps, any data and people-centric IT. “Cloud OS” is being used to describe different capabilities, public/private cloud (virtualisation?) and viewed as one platform. MS leveraging experience with their own data centres in the design of server OS. Leads to a video of customers talking about Server 2012.…

This leads into a discussion about Windows Server 2012’s Enterprise performance capabilities.

Videos feature a lot of people opening server racks interspersed with customer sound bytes.. A large-Ish IT pro guy walks the corridors of a datacentre.

Bit of a plug for IIS 8, lots of people staring at screens.… voice over is a bit redundant.

Jeff’s back.. Talking data. ‘complete data platform’ from structured to unstructured (Excel to SQL to Hadoop). Bit fast, need more details, seem to be skipping to the last pillar : People centric IT

Talking about applying a security policy for attaching remote devices. Seems the remote application is a bit like Citrix?

Demo of the dynamic expansion of running Hyper-V, a bit more beating the PowerShell drum.. Demo shows updating virtual processors beyond 4, but VM not running…?

Uses SMB file shares for SQL filegroups, but is this really new? Could mount the files on an NFS mount? Seems the SMB can be managed at runtime, so maybe… Demo continues…. Explaining ‘no shared migration’ with no downtime.. Demo of deployment of a VM into Azure hosted environment: Session continues as Jeff resumes. Talks about fast track solutions. Plug for certification? There’s a lot to learn in the new platform, that’s for sure.

Stay tuned for the Keynote.… 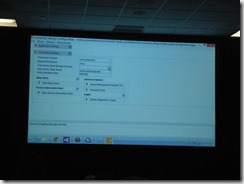 Best practices in the Identity Management world come hard-won, and are often discovered only after going down paths that seemed perfectly reasonable […]