Earlier this month I flew to Toronto, Canada to attend the 2016 Microsoft Worldwide Partner Conference.  This was my first time attending a partner conference, and it was quite an experience.  There was far too much content to complete in a single article, so I’ll start with an introduction and summary, and then delve into specific topics in separate articles.

As you may have determined based on my previous articles, I spent some time in Silicon Valley before heading on to Canada.  It was good to get to North America ahead of the conference so I could deal with any jet lag, and get acclimated to the local time zones.  Owing to the fact that I’d only received approval to attend the conference a few weeks before it was scheduled, we had a hard time locking down accommodation anywhere near downtown Toronto.

In the end, we got lucky, and I ended up with a fully furnished apartment within 15  minutes walk of the Toronto Convention Centre.  I flew in on the Friday evening before the conference, and managed to enjoy a few activities around downtown before the pre-conference events kicked off.

Microsoft Australia kindly organised a pre-conference event for Australian partners which included a trip to Niagara Falls, with dinner, drinks and a ride on the Hornblower Niagara tour boat.  This gave many of the Australian partners an opportunity to meet or get reacquainted with each other and trade war stories ahead of the conference.  Due to a number of factors, the trip didn’t see us back in Toronto until close to 1 AM Sunday, and as a consequence I ended up missing a Dynamics pre-conference event being held by the UK Partners. On Sunday morning, I walked over to the convention centre and registered.  There wasn’t too much to do until the afternoon, when a session was held for first time attendees (FTAs) like myself.  The session was quite informative and I also met a number of delegates who I’d end up bumping into later in the conference.  The thrust of the session was to hear from previous delegates about how best to navigate the conference, and how to deal with the onslaught of sessions and meetings. The networking aspect was most valuable.

The evening was the Australian partners dinner in north Toronto, it was a good opportunity to meet up with partners again, and share some insights from recent Microsoft and Australian IT news. The conference proper really kicked off on the Monday morning.  About 20,000(?) people filed into the Air Canada centre not far from the Toronto Convention Centre for the first of three days of keynotes.  The first keynote featured a musical introduction from an artist called K’naan who I hadn’t heard of to be honest.  The stage was set, and after the music finished we were introduced to Microsoft CEO Satya Nadella. Connected Applications/Bringing it together with Power BI, Microsoft Flow and PowerApps

Which roughly translates into the broad areas of change which were unveiled throughout the partner conference.  He introduced the rebranded Dynamics 365 (combining CRM Online and Axapta) to provide a cloud ERP solution, showing how the solution targets the productivity and process changes underscored by digital transformation.  There was also an introduction to the new AppSource marketplace for business/government applications. Next up, Satya interviewed the head of General Electric, who went into some detail about how this old school bricks and mortar company decided to innovate, and migrate away from old technology.  This neatly lead to another big area which is coming fast: machine learning.

The next big thing will be machine learning, either as Azure ML or represented by the usage of a number of learning bots.  Named ‘cognitive bots’, there’s a lot of them on the way, and they represent the next big thing in cloud computing.  A demonstration was played, illustrating how  speech-to-text bot was able to read and interpret an order from a busy McDonald’s drive through, neatly building and updating an order in JSON format. Lastly, and aptly given the explosion of Pokemon Go just before the conference, the keynote ended on a mind blowing demonstration of the latest in augmented reality technology in Microsoft Hololens.  A cameraman took to the stage with a specially modified camera which was able to show to the assembled crowd what it is like to see through the HoloLens head gear. The demonstration focused on displaying the internal schematics of something quite large and impractical for a learning/training environment: an airplane engine.  The exceptional demonstration showed how a HoloLens user can interact, manipulate and zoom in and out of detailed graphical models.  Outstanding.

That’s it for Part 1.  The next part will describe sessions from day 1. 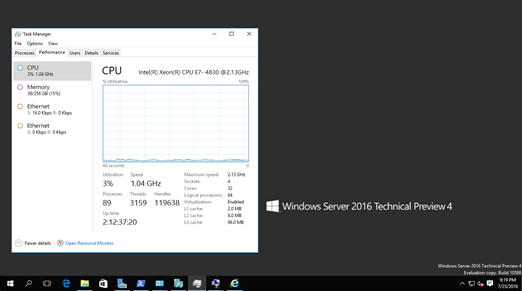 Continuing on from the previous article..  I carefully inserted the PowerEdge M910. So that’s where I left off.  Jumping straight in, I […]