Today I started down the path of getting the previously-named “Business Intelligence Studio” (now called SQL Server Data Tools) up and running on my local machine.  I already had  SQL Reporting Services (SSRS) 2014 installed, but had just never gotten around to installing the BI development suite.

I’m going to be honest and state upfront, it’s been a while since I’ve stuck my head into SSIS and SSRS development – about four years or so I’d guess.  Remarkably, on the surface it doesn’t have appeared to change that much.  In my journey I encountered an interesting issue out of the box, so I thought I’d document it here.

Firstly – what are you installing?  I found this quite a decent summary:

“There are different versions of these SSDT tools depending on the version of Visual Studio that you are using.

The other version of SSDT is confusingly called SQL Server Data Tools – Business Intelligence (SSDT-BI). Although their names are almost identical, SSDT-BI is a distinctly different toolset than SSDT. SSDT-BI is the replacement for BIDS and it enables the development of Integration Services packages, Analysis Services cubes, and Reporting Services reports.

Both versions of SSDT are no cost downloads for SQL Server users. You can find both SSDT and SSDT-BI at Microsoft SQL Server Data Tools.”

So I ran up Visual Studio and started a new Reporting project. The first thing I did was created a new Report (blank) and then dragged some fields onto the report form.  I also added an image, just for fun.  I had to configure the project’s Target URL (as localhost) and ultimately had to use a browser (as Administrator) to grant my local account credentials to publish and run reports.

Eventually I managed to get past the permissions issues, and almost deployed my almost-blank report until this happened:

“System.Web.Services.Protocols.SoapException: There was an exception running the extensions specified in the config file. —> System.Web.HttpException: Maximum request length exceeded.”

I thought to myself, well, that’s odd.  It’s almost a blank report.  It was the configuration of the SSRS server, which was limiting report sizing to the default (MaxRequestLength where its default value is 4096 KB – 4 MB).  SO I had a look at the debug folder and lo and behold, once encoded this .rdl file would be over the 4 MB threshold, because of the embedded image:

1. Go to the SSRS folder location on the Report Server

2. Open the File web.config in Notepad (or a text editor)

Now you should be able to deploy a larger report definition.

Recently I answered a question on Stack Overflow where someone was interested in mapping a character to an Enum value.  Obviously this […] 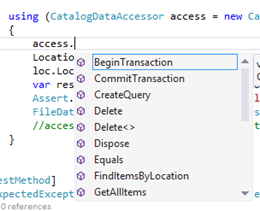 Recently we had a pretty fierce debate internally about the best strategy for data access in architectural design.  Predictably, I played middle-of-the-field, […]